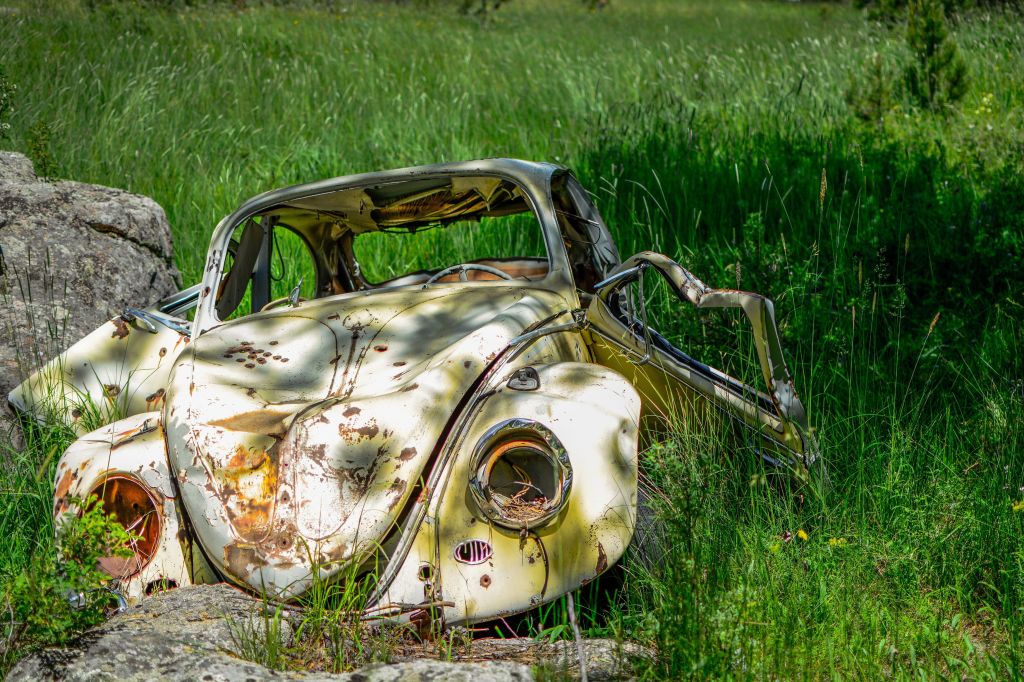 I was walking through my neighborhood on a fine spring day and what I saw through a gap in some bushes made me stop in my tracks. Sitting in the yard was the unmistakable boxy shape of a classic Land Rover, star of many National Geographic TV specials from my youth. But instead of trekking through the Sahara or African jungle it was now parked on the grass in a residential neighborhood of Seattle. It was still covered in colored leaves from the previous fall. It had become something else I remembered from my younger days — a yard car.

As a teenager growing up in a farming region of Indiana, it seemed that every house in the countryside had a car sitting on blocks in the front yard. Not to pick on Indiana though — people from rural areas all across America talk about this. “Yard car” is a generic term for any non-working vehicle sitting in the yard. This includes pickup trucks, tractors, RVs and other more unusual specimens. Once in Washington state I saw a lifeboat from a World War 2 cargo ship in someone’s yard. It was pretty big and rather far from the ocean so it wasn’t there by accident.

No car starts out wanting to be yard car. Every car comes out of the factory shiny and new with a possibly bright future ahead of it. But one day the future yard car won’t start. If another working vehicle is available this one gets left home. Assuming it can’t be fixed quickly and affordably it will be pushed off of the driveway and onto the yard. For awhile the owners will glance at it and mutter “I really ought to get around to fixing that.” But as time passes it inevitably starts getting stripped for parts. Somebody needs a new battery or radio or whatever and the one in the car in the yard will fit. Eventually the tires get removed the car goes up on blocks.

The Land Rover was not the only yard car in my neighborhood. A Ford Mustang from the 1960s was surrounded by weeds which had grown to half the height of the tires. The Mustang’s body looked good and made me wonder why it was sitting in the overgrown grass.

Both the Land Rover and Mustang were out of their respective yards before I moved out of the neighborhood. I’m sure the Mustang sooner or later will make it into the hands of a car enthusiast who will buff it up and show it off on weekends. The Land Rover probably won’t make it back to the Sahara (if it was ever there) but may regain some self esteem four wheeling through the Pacific Northwest backcountry.

But the true yard cars, sitting on blocks in rural front yards, aren’t going anywhere soon. Maybe someday it will get sold for parts or the owner may simply get tired of looking at it and pay to have it hauled away.

I got the idea for this in a writing class at Sound Mental Health (Hi LT).  I wrote it in a Path With Artwriting class (Hi Scott) and recited it at a PWA Showcase (Hi Nikki). It was later published in a small local literary journal.